Sort of NSFW, trigger warnings: discussion of rape culture and violence against women

“They’re pretty rapey down there”, a male friend cautioned me when I broke the news about going to Brazil. Generalisations aside, Brazil offers quite a scary picture in terms of violence against women and sexual violence in particular:

More than 92,000 women were murdered in Brazil between 1980 and 2010. According to the Map of Violence 2012, the number of deaths rose from 1,353 to 4,465 in this period, representing an increase of 230 per cent. A report by the Brazilian Centre for Latin American Studies and the Latin American Faculty of Social Sciences ranked Brazil at 7th place internationally for the murder of women.  – UN Women, March 2015

So not really the place for a polyamorous, relationship anarchist, sex-positive, feminist, girl. The macho culture is very much alive here, rife with stereotypes about gender identities and roles –  such as toxic masculinity, while sexual harassment is normalised as part of everyday interactions, with minor forms of aggression as common as Ônibuses at rush hour:

[…] Women are expected to handle such habitual occurrences without making a fuss. There is a tendency for some to interpret such sexual passes as genuine romantic interest rather than abusive or discriminatory. (Brazil’s blind eye to sexual harassment, March 2014)

Here in Rio I hear “Oi, moça!” at least 5 times a day (less so in Sao Paulo), that is when I do not wear protective earphones delivering more pleasant sounds, and get at least an equal number of persistent, annoying stares (only the ones I notice; truth be told, I do not sustain the eye contact and rather look away when I sense one of these gazes approaching). So I was not looking for a hook-up when I went out to get a coffee and a pão de queijo, with only my small wallet stuck in my bra and my umbrella, but ended up on Copacabana beach, drawn by the cool beats coming from a rap show of a Brazilian artist. But soon I was checking the crowd, the male population, careful not to attract undesired attention – pretty hard, single white gringa is bound to attract attention – which for me involves evasive, split of a second looks before strategically moving to another location. He was on my left side, wearing a plastic rain cape, stern, with a fierce expression on his face. One look and I move away, applying my strategy, not really sure what I want, not willing to let others decide for me what I should have; changing location, changing publics, grins, the regular “Oi, moça!” from a bunch of dudes, the guy in the rain coat changes location as well (African mixed-race, well-built, pretty much the embodiment of one of my most recent fantasies – what? we don’t get that much racial diversity back in Europe, Eastern Europe even less) and continues to follow me and my elusive moves (he later told me he must have looked pretty creepy chasing me across the praia in a rain cape, so he decided to take it off). As I make my way to the exit, he stops me with a perplexed smile and “what are you doing?”, I smile back “Leaving, I want to get a coffee”, “So let’s get a coffee”. On our way to the exit, I find out he’s 25 and a student of the Military Academy, from Brasilia, in town for a karate competition. Oh noes, this cannot possibly go well, I think to myself. First move, kill the expectation that accepting an invitation for one thing means accepting everything that might follow: “You know what, we’re just going for a coffee, it doesn’t mean we’re gonna have sex”, I decided to play the blunt and direct card. “I can try to convince you to change your mind”, he replies. Second move, kill the playing hard to get scripts in the bud, as they’re deeply embedded in the rape culture, especially here in Brazil: “I do not need convincing of anything, if I want to have sex with you, I will tell you upfront, I do not like nor encourage the chasing games”. I proceed on explaining how these scripts are so dangerous, because they enforce the idea that no means yes, or that reluctance is just asking for more persistence from the male’s part. This in the first 5 minutes of our conversation. “So what was it with making me chase you across the beach then?”. Third move, call out the violence culture: “You guys in Brazil tend to be very aggressive, I feel that even if I look your way, you think I am consenting to having your baby. It doesn’t feel safe to look at you, especially if I haven’t decided if I want something or not. There’s always the possibility that some guy gets aggressive if you don’t continue to respond once you’ve made eye contact”. He gets it. He does try to put his arm around my waist, which prompty makes me recoil. He notices. Fourth move, call out the patriarchal idea of women as property the man protects: “Yeah, I don’t like this, makes me feel like I’m your property”. “It’s not that, but it is to protect you from other guys”. OK, not ideal, I let this one slip. One point that my consensual self is not particularly proud of, I let him kiss me pretty much within the first 10 minutes, before even reaching the café (but he was damn cute, I did want to kiss him anyway).

At the café, I manage to pass across the information that I am not monogamous. Relevance, you might ask? Again, an opportunity to challenge the women-as-property belief in a sexist society, very often linked to monogamy: “I do not belong to anyone, I express myself as I feel, towards anyone”. As things progressed and it was becoming more evident that we do have chemistry and we do want to have sex, a new challenge arises: I am in a female shared room in a hostel, he’s in the barracks at the academy. He has the idea of going to a motel nearby, a taxi driver should know one. We met 1 hour ago, are we really doing this? Yep. Time for the sixth move, state consent as renegotiable and revocable: “What if we get there and I change my mind? what if I don’t like it and I want to leave? You know, it’s like when you go to the restaurant and realise you’re not really hungry, and you just take an appetiser. And they don’t force you to eat the entire menu just because you’re there…” But I get no strange vibes from him, at this point the guy has an idea who he’s dealing with. And since we’re at it, seventh move, state your personal sex preferences: “you know that every girl is different, I really don’t like rough sex, I’m probably the most delicate girl you’ve ever met”. “You can teach me”, he says. Oh, good news. “I like to give women pleasure and see them enjoy it”, he adds. Again, good news, or maybe not, a guy advertising this could still mean the focus is on his achievement (how many times he scored being now replaced by how many times he makes her orgasm, in which case if she doesn’t deliver, it’s his personal failure – so the pressure is yet again on the woman) or his visual pleasure, or that he’s looking for a prize by implicitly stating that this is rather an exception to the general rule of not caring about the woman’s pleasure, and that he’s doing you a favour.

So we did reach the motel and lived happily ever after. Well, not exactly, but instead had great, consensual, one-time sex, and went back to our respective single-sex dormitories in the middle of the night, him because he had training early morning, me – just to mark the event as casual, with no after-sex cuddling or sleeping together (not that I don’t enjoy it, but it felt right just the way it was this time).

The next day, I was done with Rio and its decrepit hostels that could easily make top five picks for the gore movies with the same name. The fact that I discovered two giant cockroaches in the shower didn’t help much. Plus Rio started to feel like London, the cold drizzle which my ridiculously inadequate clothes and sandals couldn’t really protect me from was making me ill. So the plan was to return by bus to Sao Paulo to bourgeois cafes, bug-free bathroom facilities and equally overpriced… everything. Except taxis, taxies are cheap. I did have my share of sunny time at the seaside, the casual hook-up, concerts on the beach and caipirinhas. Definitely done. I wanted to check the Portuguese Library in the morning before I left. It looked amazing online, but when I got there everything was covered in plastic. Until I saw this beauty on the pavement, it sort of changed perspective: 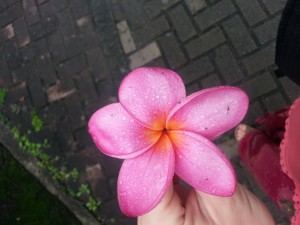